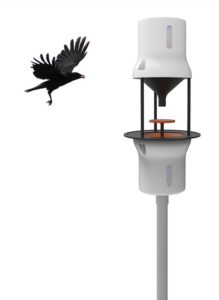 Worldwide, about 4.5 trillion cigarettes are littered on streets each year. But a Dutch startup is training crows (yes, birds!) to help clean up littered cigarette butts.

The startup, called Crowded Cities, is working on training crows to recognize and pick up cigarette butts from city streets and parks. The idea is to train the crows to drop cigarette butts in a ‘Crowbar,’ which scans the item to confirm it’s a cigarette butt, and then gives the crow a food reward to reinforce the behavior.

According to a study published in the International Journal of Environmental Research and Public Health, discarded cigarette butts are a form of non-biodegradable litter. They’re carried as runoff from streets to drains, to river, and ultimately to the ocean and beaches. Not only are cigarette butts unsightly, they’re also toxic to certain marine animals, and there have been cases of children ingesting them.

The inspiration for Crowded Cities came when its founders, interaction designer Ruben van der Vleuten, and experiment designer Bob Spikman came across a man named Joshua Klein, who is teaching crows to collect coins. This led van der Vleuten and Spikman to designing the Crowbar – a system designed to train crows to pick up cigarette butts.

The design works based on a crow first bringing a cigarette filter to the Crowbar, where they drop it into the bottom funnel where it’s checked. Then, after a camera has recognized the cigarette filter as a filter, it releases a piece of food onto a table in front of the crow, as a reward. This is done with the intention that the crow will fly away and inform others of this system, so that more crows participate in cigarette butt collecting.

Crowded Cities says that it is building its first Crowbar, and that all of its different parts are working and ready for assembly – so the next step will be to test it with crows.